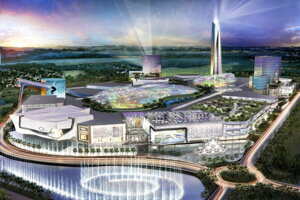 An interchange needed for America's biggest mall will begin construction shortly, with bids from contractors said to have been due earlier this week, according to Miami Today.

Construction will begin shortly after bids are received, a representative said.

Developer Triple Five plans to spend US$220 million alone just on roadway and highway changes required for the project.

The mall cannot open until a Turnpike interchange is completed, expected in 2025, the developer's attorney said. Site plan approval isn't even on the agenda for the developer until 2020 since infrastructure work will take so long.

Utilities work is also now in design, with construction expected soon at a cost of US$7 million. Completion is expected in two years, with the developer covering costs.

American Dream Miami is expected to eventually become the biggest mall in America upon completion, with retail, dining and entertainment. Total cost is estimated at US$4.5 billion to US$5 billion.

In total, the project will include 7.2 million square feet with towers as tall as 50 stories. It will also have restaurants, the world's largest indoor ski slope, a walk-through aquarium, a skating rink, an ice-climbing wall, live theater venues for Russian ballet and Chinese acrobats and 2,000 hotel rooms.

Nature of personal information collected from the user: On this page, you are asked your name, email, phone to customize the best response to your request.

Using this information by your company: Your information is collected to provide you with free information about European subsidies, investment, trading and export opportunities, etc. around the world. These personal data may be processed by computer by MDA CAPITAL INVEST, a.s.

Method of data transfer to other firms: Your data will never be disclosed to third party companies without your prior consent.

Procedure in place to edit or delete your information personal or disable: According to Act No 78-17 on Information Technology, Data Files and Civil Liberties dated 6 January 1978 (DPA), modified to implement Directive 95/46/EC on data protection (Data Protection Directive), Decree No 2005-1309 of 20 October 2005, Users may exercise a right of access to information and if a right of correction or withdrawal of the information by writing to: contact@mdacapitalinvest.com

To remove your information, please contact us to the following address email address: contact@mdacapitalinvest.com or telephone number: +420 773 988 087

Privacy preferences
We use cookies to enhance your visit of this website, analyze its performance and collect data about its usage. We may use third-party tools and services to do so and collected data may get transmitted to partners in the EU, USA or other countries. By clicking on 'Accept all cookies' you declare your consent with this processing. You may find detailed information or adjust your preferences below.